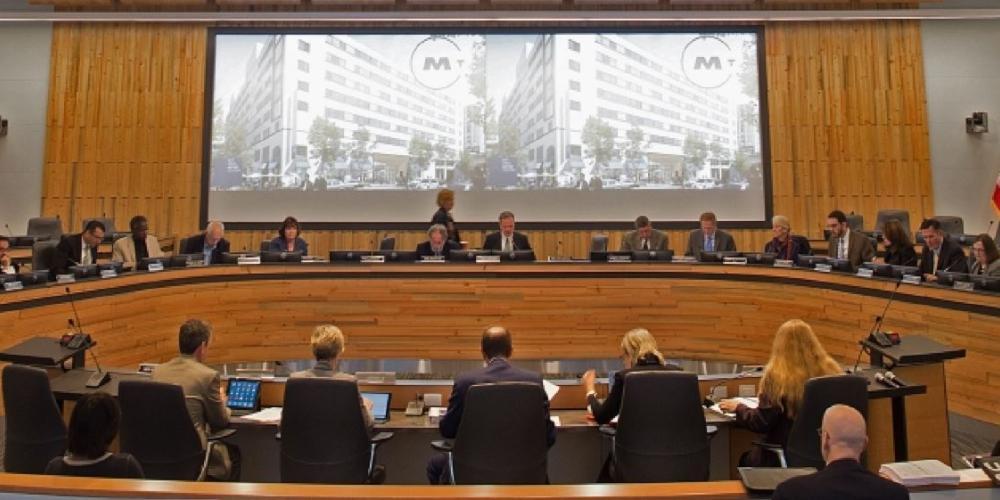 After brief BATA and BAHA meetings, the Metropolitan Transportation Commission held its monthly meeting at the Bay Area Metro Center on Wednesday, May 23.

One proposed piece of state legislation — AB 2923 (Chiu): BART Transit-Oriented Development — prompted particularly lively discussion at the meeting. This bill would require the BART board to adopt new transit-oriented development guidelines that establish minimum local zoning requirements for BART-owned land that is located on contiguous parcels larger than 0.25 acres, within 1/2 mile of an existing or planned BART station entrance, in areas having representation on the BART board of directors.

In clarifying the bill, Commissioner Josefowitz (who is also the also BART Vice President) explained that, currently, BART has full land use authority for transportation-related investments (such as building new BART lines or parking structures), but for housing-related investments, BART is treated like any other land owner. This bill would allow the elected BART board to set minimum zoning standards (things like density, heights and parking ratios) on the land that it owns within San Francisco, Alameda and Contra Costa counties (these are the counties that have elected BART board representatives). BART would then have to go through a CEQA process to define the standards, and cities would have to rezone to be compliant with those standards. Josefowitz explained that deep affordability standards are also built into the bill to provide for affordable housing.

MTC Executive Director Steve Heminger also noted that though BART already has its own development standards, local zoning is consistent with them in only 8 percent of locations. “This is land that BART owns, next to its own stations, so if we can’t pass this, we have little hope of changing the housing landscape on a larger scale,” explained Heminger. The ABAG Executive Board adopted an “oppose unless amended” position at their most recent Executive Board meeting, and several Commissioners raised concerns that the bill would erode local planning authority. Other Commissioners, in addition to four public commenters, explained why they supported the bill, and the Commission unanimously voted to support and seek amendments on the bill. A video recording of the discussion is provided below:

After that, the Commission voted to adopt the $53.2 million FY 2018-19 Regional Measure 2 operating and marketing program and provide updates on programming, route changes and recommendations for three routes at risk of losing funding. Read more details in the item attachment.

Finally, the Commission voted to approve a revised program framework for a Regional Means-Based Fare Program. The program will provide a discount of 20 percent to eligible low-income adults on transit rides for four large Bay Area transit operators — BART, Caltrain, Golden Gate Transit and SFMTA — during a pilot period. Read the full details of the program in the item attachment. Several public comments following the vote expressed general support for the intent of the program but also disappointment at its limitations. Most agreed that greater fare integration region-wide should be prioritized for the program to be truly effective.

The below video from an earlier 5/9 meeting of MTC's Programming and Allocations Committee offers an in-depth explanation of how the program will work, and some of the considerations that went into the different program options Commissioners had to choose between.

Next steps include program development and design as well as approval from the boards of the four transit agencies. Staff expects the program to launch in mid-2019. It is important to note, however, that funding for this program comes from SB 1. The program would have to be discontinued if voters decide to repeal the gas and vehicle tax increases implemented by SB 1 this November.

For more information, you can watch the recording of the entire 5/23 meeting alongside the meeting agenda.