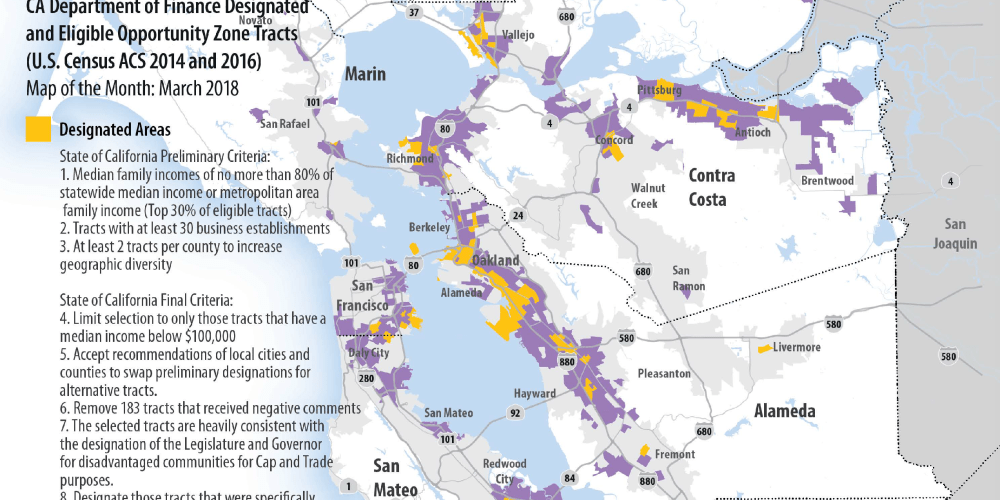 March's Map of the Month from MTC and ABAG Executive Director Steve Heminger looks at Bay Area "Opportunity Zones" designated by the State of California Department of Finance (DOF).

From the Executive Director's latest report to the MTC Commission and ABAG Executive Board:

The federal tax bill, passed in December 2017, allows investors to defer or eliminate capital gains on investments made in “Opportunity Zones”. These zones must be designated by the governor in each state from a set of eligible Census tracts. Governors must select no more than 25 percent of eligible tracts statewide. Federal criteria for determining eligible areas states that tracts must either have poverty rates above 20 percent or median family income below 80 percent of either the statewide or metropolitan area income. Slightly over 3,500 Census tracts in California qualify under this criteria, spread across 54 counties. The state’s final recommendation is provided on the map. Within the Bay Area, 530 tracts were eligible under the federal criteria, of which 107 were recommended by DOF to the governor. Of the 107 recommended tracts, 94 tracts were MTC Communities of Concern.