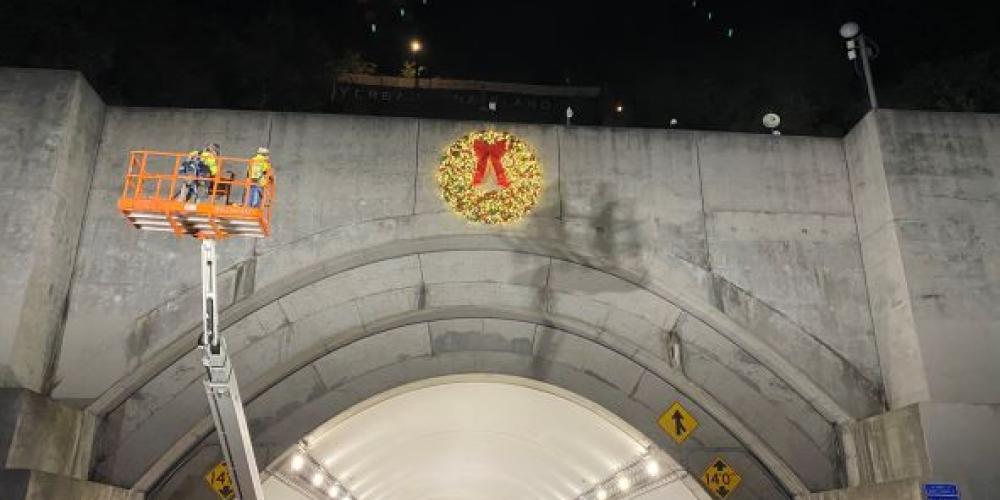 The Bay Area Toll Authority and Caltrans contracted Ghilotti Construction for the work. This marks the 10th consecutive year BATA and Caltrans have teamed up to extend holiday season greetings to travelers on the region’s busiest transbay crossing.

Workers began the installation at 11:30 pm. Monday and re-opened all lanes to westbound traffic before 1 a.m. Tuesday.

The 13-foot, eight-inch wreath features a steel frame with artificial foliage, ornaments and ribbon. Permanent anchors for the wreath were installed above the portal in 2011, enabling BATA and Caltrans to re-use the same piece each year, though the wreath installed this season features a brand new garland, lights and ornaments, as well as a newly repainted bow. The wreath will remain in place until early January, when crews will remove the decoration and place it in storage for use next holiday season.

BATA, which is directed by the same policy board as MTC, administers toll revenues from the region's seven state-owned toll bridges. MTC is the transportation planning, financing and coordinating agency for the nine-county San Francisco Bay Area. Caltrans owns, operates and maintains the state highway system, including the Bay Area’s state-owned toll bridges.