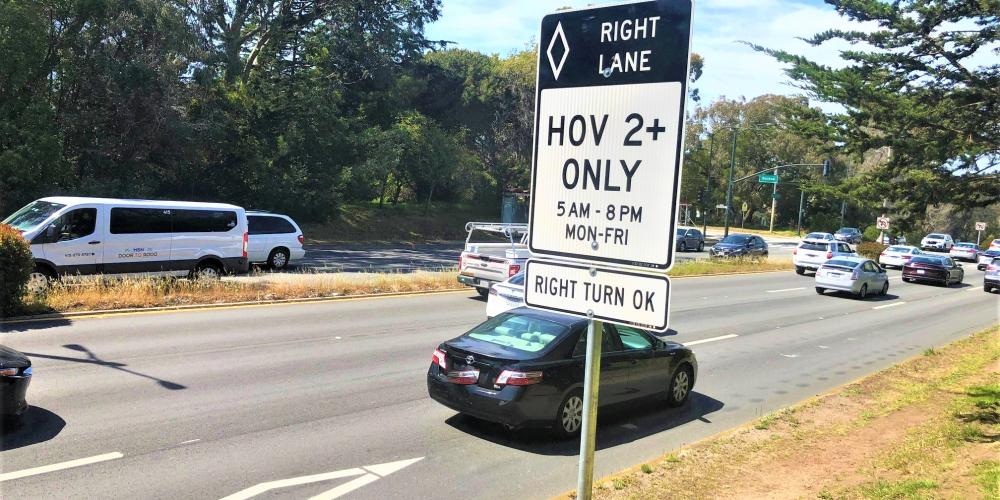 To improve the frequency and reliability of MUNI service by reducing running time and encourage carpooling, the San Francisco Municipal Transportation Agency has installed HOV lanes that allow vehicles with two or more occupants along sections of State Route 1 and U.S. Highway 101.

The HOV lanes are in effect from 5 a.m. to 8 p.m. Monday through Friday. The SFMTA  is coordinating closely with the San Francisco County Transportation Authority and has consulted with the Metropolitan Transportation Commission and the Golden Gate Bridge, Highway and Transportation District.

The pilot project is intended to assist city’s economic recovery post-Covid by improving MUNI service and reducing the number of cars on the road through carpooling. MTC’s 511 program offers multiple ways to help share rides, including long-term and one-time carpools and vanpools.

On Park Presidio Bypass, and Park Presidio Boulevard from Lincoln Way to Lake Street, there is now one HOV lane in each direction. Similar lanes are installed on Lombard Street and Richardson Avenue from Van Ness Avenue to Lyon Street.

If the initial HOV lanes prove successful, additional segments such as19th Avenue may be considered for future expansion of HOV lanes on 19th Avenue, according to the SFMTA.