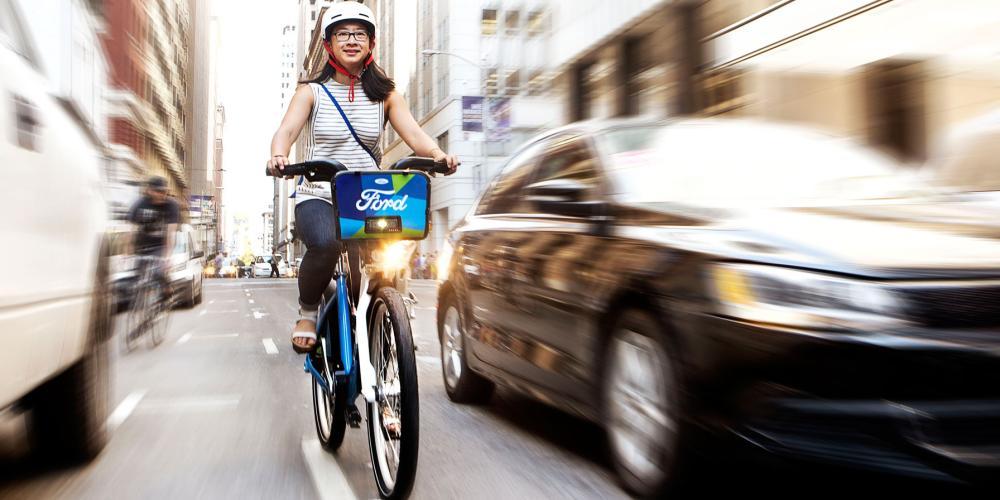 Beginning June 13, North San José residents and employees will have easier access to Ford GoBike’s bike share system. The 200 new dockless bikes will have a rear-wheel lock that allows them to be parked outside of a dock — anywhere a bicycle can responsibly be parked, including at a public bike rack or out of the way of pedestrians on the sidewalk. The new technology makes the service available to a larger community of potential bike share users.

Ford GoBike partnered with the City of San José and the Metropolitan Transportation Commission (MTC) to launch its docked system in downtown San José in 2017. The new expansion makes bikes available to a greater number of users, while the dockless technology means more destinations can be reached using the system. The service area is bounded roughly by the Guadalupe River to the west, Coyote Creek to the east, the South Bay Freeway to the north and Trimble Road to the south.

"Bike share programs can play an important role in our drive to retrofit a city built around the automobile into a city built for people,” said Mayor Sam Liccardo, who also serves as an MTC Commissioner. "I’d like to congratulate Ford GoBike on expanding into North San José, and thank them for offering residents and employees in this key employment center another green transportation option for getting around our city."

The dockless bikes will be available at the same prices as classic Ford GoBikes: $2 for a single 30-minute ride, $10 Access Pass for unlimited 30-minute rides over a 24-hour period, $15 monthly membership, or $149 annual memberships for unlimited 45-minute rides. Bay Area residents ages 18 and older who qualify for Calfresh, SFMTA (Low Income) Lifeline Passes, or PG&E CARE utility discount are also eligible for a $5 annual Ford GoBike membership through the Bike Share for All program, developed in partnership with MTC.

"We're thrilled to be expanding the Ford GoBike system so that more of the San José community can participate in bike share," said Ford GoBike General Manager Emily Stapleton. "As the Bay Area's regional bike share program, we've worked to make Ford GoBike inclusive for as many people as possible, including by offering $5 monthly memberships to qualifying residents through our Bike Share for All program. These new bikes and expanded service area will only further our commitment to bringing bike share to everyone."

To find and use the new bikes, riders simply open the Ford GoBike app and tap the "unlock dockless bike" button. And, to end a ride, slide the lever on the rear wheel lock into place until it beeps. Riders should park responsibly in the designated service area and use caution not to block pedestrian or wheelchair access.

San José is part of the regional network of Ford GoBike, which now consists of 290 stations throughout San Francisco, Oakland, Berkeley, and Emeryville, as well as San José. Expansion in San José is well underway and continuing: in addition to the 44 existing stations and one planned station being installed soon, 19 additional stations have been proposed and are going through the community review process, including one at the Berryessa BART station.

About the City of San José

With more than one million residents, San José is Northern California’s largest city and the 10th largest city in the nation. San José is known as the “Capital of Silicon Valley,” and the City’s transformation into a global innovation center has resulted in one of the largest concentrations of technology companies and expertise in the world. In 2011, the City adopted Envision San José 2040, a long-term growth plan that sets forth a vision and a comprehensive road map to guide the City’s anticipated growth through the year 2040.

About the Department of Transportation

Launched June 2017, the Ford GoBike system is an integral part of the Bay Area’s transportation network. With 289 stations and more than 3,000 bikes on the ground across San Francisco, San José, Berkeley, Oakland and Emeryville, the system has generated more than a million rides in less than a year. When completed, the 7,000-bike, 546-station Ford GoBike network will be the second-largest bike share system in America, setting new national standards in density, convenience, and equity.

About the Metropolitan Transportation Commission (MTC)