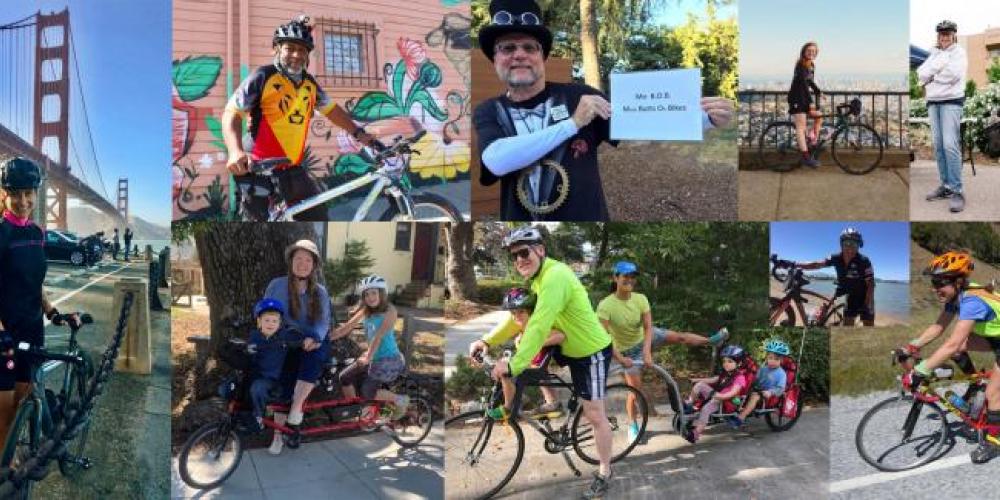 Bay Area Bike to Wherever Days (BTWD) organizers have named the winners of the 2021 Bike Champion of the Year awards.

Given to individuals for inspiring bicycling in their Bay Area communities, this award recognizes an individual (or in one case, a whole family) from each of the nine San Francisco Bay Area counties for their commitment to bicycling as the primary mode of transport.

The 2021 winners include Daniel Wood and his triplets – Hazel, Alden, and Malia – from Santa Clara County, who can be seen riding their bikes to and from school each day. According to nominator Sharlene Gee, “I am so proud of them for using their own power to get to school on time, in good moods and ready to learn. I’ve seen their road skills and awareness rapidly and organically grow. They set a powerful example for everyone at the school.”

And in Contra Costa County, Smitty Ardrey can be found every Thursday in the summer fixing bikes at Bike Concord’s Bike Tent at the Concord Farmers Market in Todo Santos Plaza. Nominator Claire Linder says: “He has organized bike rodeos, pop-up bike repair clinics, and since 2019, a bike education class at Olympic High School in Concord. His drive, foresight and commitment have made biking more accessible in central Contra Costa County, bringing to life (Bike Concord’s) mission of MBOB (More Butts on Bikes).”

Here is the complete list of 2021 Bike Champion of the Year award winners:

Each winner will receive a Tailgator Brake Light and water bottle from Mike’s Bikes, a bicycle-only membership for 24/7 roadside assistance from Better World Club, a laminated, boxed set of San Francisco Bay Trail map cards from the Association of Bay Area Governments (ABAG), and a cycling jersey from the Bay Area Air Quality Management District (BAAQMD). Read all about the winners here.

Bay Area Bike to Wherever Days is presented by MTC (the transportation planning, financing and coordinating agency for the nine-county San Francisco Bay Area), and 511 (the region’s traveler information system). BTWD 2021 also receives regional support from the Bay Area Air Quality Management District(link is external) (BAAQMD), and Bay Area Rapid Transit (BART), as well as from many sponsors at the local level. Prizes for the Bike Champion of the Year winners were donated by the Association of Bay Area Governments (ABAG), Better World Club and Mike’s Bikes.

Related
Bike to Wherever Days
Bike Champion of the Year
Bicycling